Kate Flora: As many of you have read, if you’ve followed the Maine Crime Writers blog for a while, my late

mother, A. Carman Clark, published her first mystery, The Maine Mulch Murder, featuring 60-something freelance editor and gardener Amy Creighton, when she was 83. https://amzn.to/2KcJsSI She and I used to joke that unlike Mary Higgins Clark and her daughter, we published in the reverse order, with mom following in my footsteps.

Writing Maine Mulch resulted, in part, from her complaints to the librarian at the Vose Library in Union that the mysteries she found on the shelf were either too violent for her taste or the characters had lives too opulent or different for a rural Maine farm woman to relate to. The librarian is said to have replied, “If you don’t like what the Vose Library has to offer, why don’t you go home and write one.” And so my mother did.

Although the majority of her writing was articles and essays about country living, as a columnist and home and garden editor for the Camden Herald, she loved reading mysteries and enjoy writing one. Inspired by her publication, she started writing a second Amy Creighton mystery, The Corpse in the Compost. https://amzn.to/2K3lEBQ She used to say that she didn’t want her obituary to read: She wrote a book once. At the time of her death, she left a draft manuscript along with my notes, notes from good friend Marilyn Hornidge, and notes from a editor she’d hired to give her advice. The notebook with all that material sat on my shelf for years.

Two summer ago, in the space between my own books, and nudged by Ann and Paula at the Mainely Murders bookstore http://mainelymurders.com, who had created a following for Maine Mulch, I sat down with the manuscript and started editing. As I’ve blogged about before, there were a lot of questions I wanted to ask my mother. As she was unavailable, I had to wing it. I’ll never know whether I made the right choices. But we were close, and I could usually find her “voice” in making changes or amendments to the book.

Last summer, when I went to type the changes into her old file, I discovered I could no longer open it. The result was the slow process of retyping the entire book, and I am far from the world’s best typist. At last, the changes were done. I gave the book to some beta readers, made more changes, and decide that readers who like Amy Creighton’s gardens, cooking, and deep curiosity about people might enjoy some of mom’s old newspaper columns. I found a few that nicely matched the events–and food–in the story, and added them at the end of the book. I then hired a cover designer, the wonderful Dave Fymbo http://www.limelightbookcovers.com, and a formatter, the patient Jason Anderson https://www.polgarusstudio.com, for the ebook and physical book versions.

My target for publication was June, but that kept getting nudged aside by my own books, and by a lovely vacation barge trip on the Canal du Midi. Now, at the end of July, I am happy to say that this memorial act for a wonderful mother and writer is complete, and The Corpse in the Compost is available in print and as an ebook. 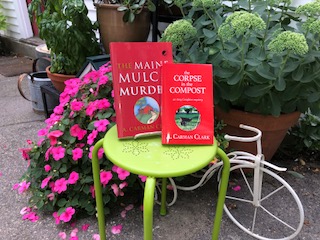